Patishch Kail, Close But No Cigar

Instead of the usual Ortega hard taco shells, I recently bought a pack of 12 Ortega Flour Tortillas.

First I checked for hashgacha of course, and yup, the tortillas are OU pareve. But not only OU pareve, they are also Patishch Kail. 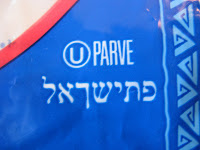 - Is there a new chumra I haven't heard about? Patishch Kail?

- Perhaps the OU Pareve is also a typo, and the stuff is really OR (registered trademark) Parvenu? (Thanks, spell check)

- What is Parvenu anyway, spell check?

I contacted Ortega to get an answer to these urgent questions.

Marge Broncaccio responded to my query:

As you would expect, we place a great value on the opinions of our consumers. So, we were truly delighted to hear how much you enjoy our Ortega Flour Tortillas.

At B&G Foods, Inc. we are well aware that quality products and customer satisfaction are a winning combination.

We hope you will continue to enjoy our many fine products.

Thank you also for bringing to our attention the spelling error.

Please accept the complimentary coupons that I will be mailing to you today.

My Pi also brought the matter to the attention of Rabbi L. We have not heard back from him. Pehaps he is busy with other things at the moment.

Responding to Patishch Kail is clearly not as urgent for Rabbli L. as responding to the advertising campaign some clever marketing person came up with a few years ago, that was caught by my Pi.

It was also in the Close But No Cigar category: Enjoy Drake's Cakes at your Passover Seder, OU Dairy!!! The OU took care of that one very quickly.

By the way, the tortillas worked really well with chili. 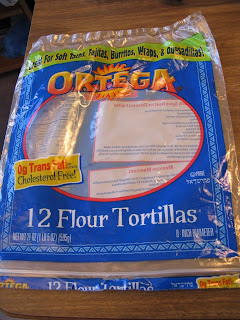 Can someone help me out with an answer to this question.

Let's say I have a brilliant thought or observation that I would like to share with the known universe.

When should it be blogged, when should it go on facebook, and when does it go on twitter? I would like to post on all three of course, but I don't want to start repeating myself or breach some rule of social networking etiquette.

Or reveal myself to be some clueless geek wannabe.
Posted by the moot at 6:00 AM 2 comments:

It seems like variations on the economic recession and Obama's recovery plan were popular Purim themes this year.

We got the very clever:

A Purim Recovery Package ("Passed by the Smith House 5-0")

And at least one or two more which I can't remember.

We got more Chanukah Gelt this Purim than we did in December.

(Not only bailout gelt, but also chocolate coin Clues from the Auman's Movie theme ("3 Coins In A Fountain").

Here, in its entirety, is our Purim story:

"When Life Gives You Lemons, Make Lemon Tea and Eat Cake"
1 Written before he became king. During his reign, he would suffer from insomnia. Book of Esther 6:1
2 Book of Esther 1:5
3 Shushan Journal, Business Lunar Month, The Enquirer of 127 Nations, et al
4 “Hey, you never know.”
5 You know who. Book of Esther 3:8
6 This is every madman and despot’s Plan.
7 Bought at Shushan Target for $18.99 www.target.com/Sackcloth
8 This was the only option available to them as plastic colored wristbands and ribbon shaped magnetic bumper stickers had not been invented yet.
9 Not because of trying to bribe the king, that was ok, but because of a scandal concerning inappropriate behavior towards the queen.
10 This was, and is, unprecedented in that it was approved and even endorsed by a non Jewish government.
11 Book of Esther 8:16
12 After the events related in The Book of Esther, Achashveirosh once again waffled on his position on the Middle East, and came up with an obvious solution to the problems plaguing this region - The Let’s All Just Be Friends And Be Nice To Each Other Plan.
Contents of Shalacmonos

If by chance you received Shalacmonos from us and did not get a Lemon, or got a different flavor Yogurt, or just got Coins and Tea ... well, all I can say is, we ran out.

Just be glad you got anything in these rough economic times.
Posted by the moot at 5:52 PM No comments:

I somehow corrupted the toolbar in SQL Server Management Studio (SSMS) the other day:

This is what it looked like
when I selected Edit, and selected File:

At first it was annoying. When I thought about it a little longer, I realized, Wow! Think how productive I could be using this toolbar!
Posted by the moot at 9:09 AM 1 comment:

While doing some research for this Purim's shalachmonos insert, I came upon this valuable piece of information - Sackcloth is available for $18.99 at Target.

Just in case anyone wants to order some. And you can be the first to review it. 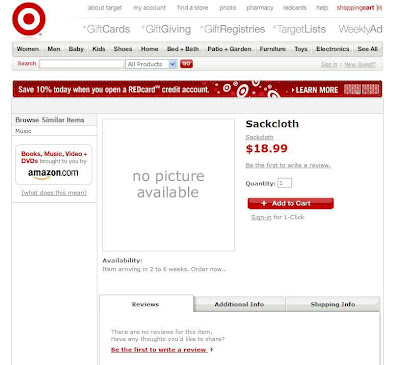