What Color Are These Dresses? 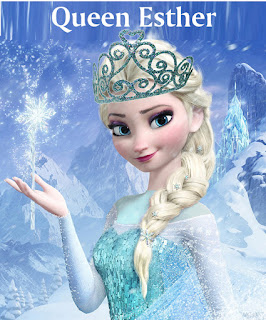 "Letters Go"
The snow glows white going to Shul tonight,
Where we read about what has been.
A kingdom with Jews in dispersed locations
But Esther is the queen.
Haman is howling, has an evil storm inside.
Wanted to kill the Jews, heaven knows he tried!
Esther, don’t let them see
You are a Jew, a daughter of Yimini.
Conceal, don’t reveal, don't let them know. Mordechai said so!
You must go, Esther you must go, even though
Achashveirosh hasn’t asked for you anymore.
To try to save us all, you must go.
Maybe that’s what you are Queen for.
Mordechai didn’t care
What Haman would say.
He wouldn’t bow down
Haman’s rage never bothered him anyway.
Not funny how Haman's plan
To try and kill us all,
Struck fear into all our hearts.
It was a very close call!
It's time to see what Esther can do
To make Haman’s evil plan fall through.
God made it right, it’s plain to see, we’re free!
Letters go, letters go!
Messengers ride like the wind and fly.
To 127 countries they go.
So the Jews won’t have to die.
In Shushan they stood,
To be remembered today.
Put your costumes on!
Today is Purim despite the icy ground.
We bake Sierpinski Fractal Hametaschen by the pound.
It’s a great day; We’re sure to have a blast!
Every year it’s the same,
Don’t forget the past!
Time to go, time to go!
Deliver Shalamonos at the break of dawn,
Eat Hamentashin, have a festive meal.
Maybe by Pesach the snow will be gone!
Hear the Megilla, give Tzekah,
Spin the Gragger any way.
Put your costumes on!
Purim is our favorite holiday!

To see a YouTube video of one of the many "Letters Go" imitations, click on "Let It Go"
Posted by the moot at 9:23 PM No comments: